Buy one or more Bingo cards and daubers. The more cards you play, the better your chances of winning!

Bingo balls will randomly be called out by their letter-number combination.

If your cards have that combination, mark the number with your dauber.  Example: If “B-7” is called, mark B-7 on your card.

Mark your cards quickly! The winner is the first person to cover five spaces in a row — vertical, horizontal or diagonal — in basic Bingo.

Shout “BINGO” when you get five marks in a row. Your card will be checked and if correct, you win the jackpot! When more than one person wins, the jackpot is evenly divided.

For more fun — and more ways to win — halls often play varieties of basic Bingo, such as pyramid, blackout and arrowhead.

Ask for your electronic Bingo machine. It looks like an electronic tablet.

Choose the number of cards you want to play. As each of the letter-number combinations are called, you enter the number into the machine — this may be via buttons or a touch screen display.

The machine will check each number you put in and mark each and every relevant card. The card or cards which are closest to providing a win will display on the screen.

If a card shows a win, shout “BINGO”!

Get in the know!

With this game you pull the perforated tabs to reveal if the inside of your ticket matches the winning combinations on the ticket face.

Your cash prize is awarded instantly!

When a bingo game is played “any way” this means that the winning pattern can be completed in any direction!

A large board at the front of a bingo hall that displays the numbers that have been called during the game.

A group of bingo sheets bound together to be played in a single session (one sheet per game).

Pattern where you must cover the whole card to win.

The person who calls out the bingo numbers.

Pattern of two wild numbers, three lines and no corners. 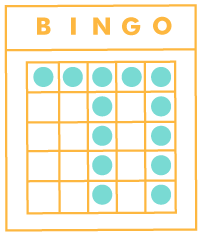 Bingo dauber is ink-filled bottle with a foam tip on it used to mark the called numbers. As a bingo number is called, dab the paper card. 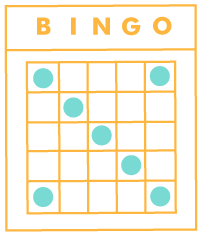 Specific pattern that includes one wild number, three lines and no corners. 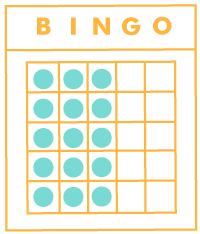 The center square of the card. It’s like a Joker – you get a free space every time!

aka cashier, they sell pack games and computers to customers. Also, this person is extremely helpful, let them know if you are new to bingo!

Pattern of a straight line in any direction.

During this game, the caller will tell bingo players to dab out all ever or odd numbers, then will call only odd or even numbers until someone wins.

This person walks around the hall selling pull-tabs or event tickets to plays! If you win, this person will pay you at the end.

Pattern of one wild number, two bingo’s and no corners. 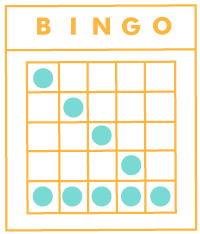 The hardest bingo game yet – just as it sounds, this game of bingo is when the ball are called super fast. 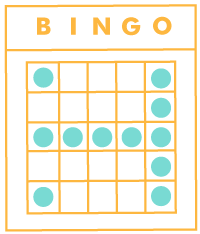 Patterns that are the shape of letters in the alphabet. 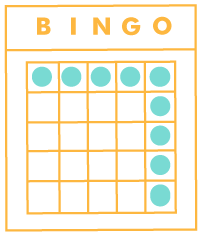 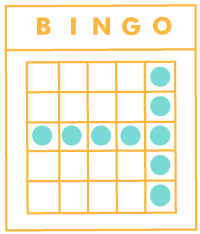 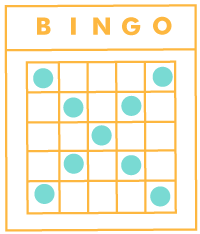 This person sells individual sheets during the course of a bingo session. They also verify when a player shouts BINGO and will bring winnings to that play.

aka “free” numbers. These are often picked by the first ball being called on that game. Example: if the first ball pulled is “13,” then all numbers ending with “3” will be marked.

**Lingo may vary from hall to hall**